For Mary Lynn Wigodsky B.S.N.’71, P’00 and John Wigodsky ’71, P’00, giving to Duke comes naturally. Over the years, their level of engagement has only grown, by supporting the Annual Fund for nearly 50 consecutive years, chairing reunions for their Duke class multiple times, and building on what it means to be a Duke family.

A Legacy of Giving

Attending Duke is a dream that can be hard to imagine coming true. But thanks to donor support and the Karsh Office of Undergraduate Financial Support, that dream is made possible for the best and brightest students every year, even those unsure of how they can afford the cost to attend.

That’s how Mary Lynn found her way to Duke — in part through the generosity of federal grant funding.

This year, the Wigodskys are celebrating their 50th class reunion at Duke. As enduring members of the Annual Fund Cornerstone Society, they have given to Duke for 48 consecutive years out of those 50. It cannot be overstated how special an achievement it is to give so soon after graduating, and to continue that level of philanthropy and engagement with Duke long after.

“I’ve learned so much working with the Annual Fund about needs that deans confront and can respond to with discretionary money,” Mary Lynn says.

Their consistent long-term support has helped Duke’s various leaders over the years accomplish many of their signature plans, addressing financial gaps wherever needed most, whether that’s been for need-based financial aid, teaching and mentoring, experiential learning opportunities, or other flexible operating support.

“I think it’s great to be able to forward the university’s goals, enabling the deans and administration to do things beyond the normal course of business, helping students out and fostering programs that otherwise might not be affordable."

“I think it’s great to be able to forward the university’s goals, enabling the deans and administration to do things beyond the normal course of business, helping students out and fostering programs that otherwise might not be affordable,” John says.

These two Dukies have helped Duke in any way you can imagine, behind the scenes, every day. Mary Lynn and John appreciate being able to bring wonderful opportunities to the next generation of students who are making a difference in the world.

All Roads Lead to Duke

Mary Lynn grew up in Talbot County, Maryland, a small community along Maryland’s eastern shore where fishing and farming were the primary industries. She was at the top of her class in school, but despite strong credentials, there weren’t many role models for women in careers outside of nursing or education. Mary Lynn’s high school guidance counselor suggested that after graduation she attend the school of nursing at the local hospital. While Mary Lynn would’ve gained on-the-job training, it wouldn’t have resulted in a college degree.

“My guidance counselor thought that was right for me, but I was pushing against that,” says Mary Lynn.

Her teachers and mentors saw the promise Mary Lynn had, and directed her to look at schools in North Carolina; even in her home state of Maryland, one of her teachers was a huge Duke basketball fan during those pre-Coach K, Vic Bubas P’72, P’75, GP’98, GP’02, GP’04, GP’12, GP’13 and Bucky Waters’ GP’09 years. Unsurprisingly, it did not take long for Mary Lynn to become enthusiastic about the Blue Devils. She interviewed with then Dean of Student Affairs Bill Griffith, and they had an amazing connection. Instantly, Duke felt like her place.

“Coming to Duke opened my eyes to the larger world and opened a lot of doors for me,” Mary Lynn says.

For John, getting to Duke was a bit more challenging, logistically speaking. That is, he almost never arrived because of a traveling snafu.

John grew up in San Antonio, Texas, and wanted to attend a college out-of-state, particularly in the Southeast. So, he began searching with that criteria in mind. At that time, he was drawn to forestry, which got him interested in Duke’s well-recognized School of Forestry and Environmental Studies.

In his junior year of high school, John scheduled his interview at Duke and decided to make the trip up to Durham to see what it was like. But the International Association of Machinists union began a strike, grounding flights across the U.S. — including John’s flight from San Antonio to Raleigh-Durham. He had to think quickly about how he would make the almost 1,400-mile trip across the nation.

John ended up hopping on a train, which arrived in Raleigh, North Carolina, at 4:00 a.m. the morning of his interview. He then got on a bus at 6:00 and made his way to the Bull City, reaching campus just in time. He impressed his interviewer simply by his capacity to succeed despite all obstacles. It showed a Duke tenacity.

John and Mary Lynn entered Duke at a time when it aspired to be something like a Harvard of the South. Embracing a new national presence that was growing exponentially was not without challenges; students could feel the academic pressure ratcheting up.

Looking back, a few things stood out to them as undergraduates going through the Duke experience. In particular, the idealism at the School of Nursing struck Mary Lynn. The code, character and rituals were uplifting.

“It kept you focused on the goal, which was to make a difference in the world and bring health and healing to people,” says Mary Lynn.

For John, his foray into forestry turned out to be short-lived. He soon became a management science major back when the School of Business (now Fuqua) was just starting up. He appreciated the strong background in accounting it gave him, as it would serve him well all throughout his business career.

These years were formative and for Mary Lynn, made possible with financial support and recommendations of faculty.

For John, a small academic scholarship from P. Huber Hanes Jr. ’37, led to a relationship that began with the thank you notes he wrote each year.  Later, that relationship would launch John’s career.

In Mary Lynn’s last two years at Duke, she earned a full-ride in the form of a National Institutes of Health grant by way of President Richard Nixon LL.B.’37 amid his push for universal health care and investments meant to spur growth of health care professionals. The grant was for those interested in going into the field of mental health, paying for tuition and fees for two years, and providing a small stipend for meals and housing.

Today, she recognizes that compared to the funding challenges college students face now, she was incredibly fortunate. “What a huge difference it made,” Mary Lynn says. “I was privileged to have those opportunities. I had originally planned to go into psychology, but it did steer me into nursing.”

Around the same time, the university made the decision to merge the Woman’s College on East Campus with Trinity College of Arts & Sciences. This resulted in unifying the university judicial boards and honor systems. Mary Lynn and John each served as a representative for their respective schools; this was the impetus behind their chance to meet one another.

Although the boards had combined into one in the second semester of their junior year, they didn’t start dating until the ACC Tournament of their senior year. “He was a little slow asking me out,” jokes Mary Lynn. To which John adds, “She was intimidating.”

After Duke, they each went on to graduate school. The two continued dating and were married as soon as they both finished.

Mary Lynn pursued her commitment to mental health by acquiring a M.S.N. degree in adult psychiatric nursing from Yale University in 1973.  John advanced his interest in business acquiring an M.S. in management at the Sloan School of Management at M.I.T. in 1973.

After graduate school, John and Mary Lynn were interested in coming back to North Carolina. As John was looking for employment, he reached out to P. Huber Hanes again for help, which resulted in an interview with what was then Hanes Corporation.

“That was my first job. I ended up working there for 13 years thanks to his making the connection for me.

“I always appreciate scholarships and financial aid and what it can do for Duke students.”

Mary Lynn and John aren’t the only ones in their family with an allegiance to Duke. One of their children, Andrea Rohrs ’00, attended Duke for her undergraduate education.

“Like us, Andrea met her husband at Duke. She got involved with the Episcopal Center and that’s where he was, a year ahead of her.”

The chaplain at the time was Rev. Anne Hodges-Copple ’79, P’19, P’21, now a bishop in North Carolina. Hodges-Copple was a fabulous role model — she inspired Andrea and her future husband both to become Episcopal priests. Their daughter’s love for community service and the church is one of the reasons why the Wigodskys allocate some of their resources to the Duke Chapel. Following seminary, Andrea served as the Interim Chaplain at the Duke Episcopal Center.

In fact, family activities are a constant reminder of the university that has informed so much of their lives, whether it be basketball related or connecting with Duke alumni for important events. For example, Krzyzewski is a household word that even their tiniest grandkids know. John says these youngsters are very much pointed in the direction of Duke, when the time comes.

Recently vaccinated for COVID-19, Mary Lynn and John were finally able to see their grandchildren again. In a road trip with them, they of course had to drive by Durham. Campus was closed, but the views from inside the car windows were enough to instill the same Duke pride that comes from a lifetime of engaging with the university. 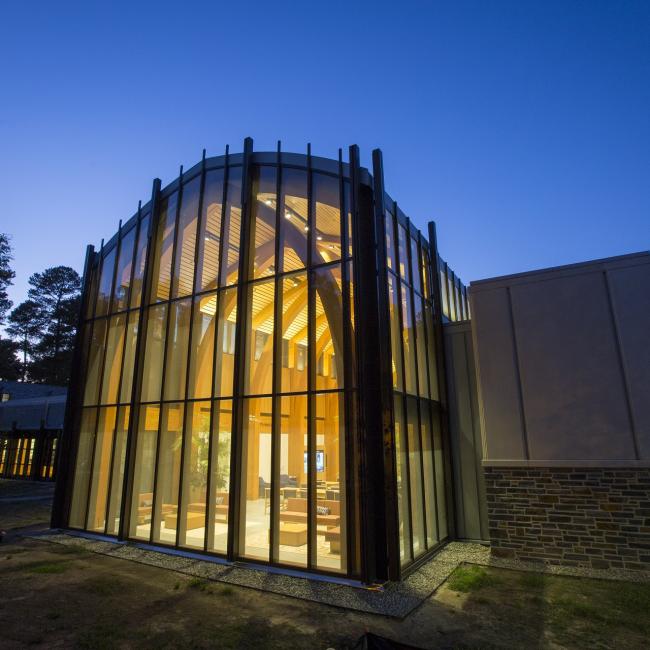 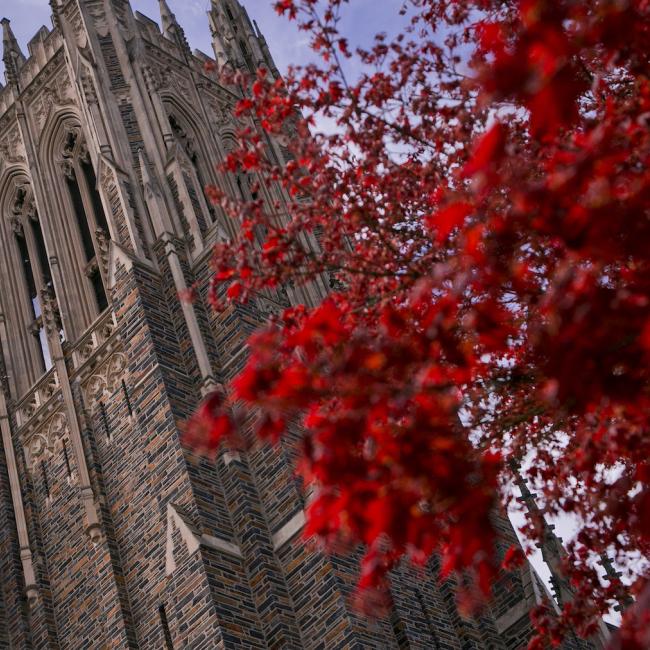 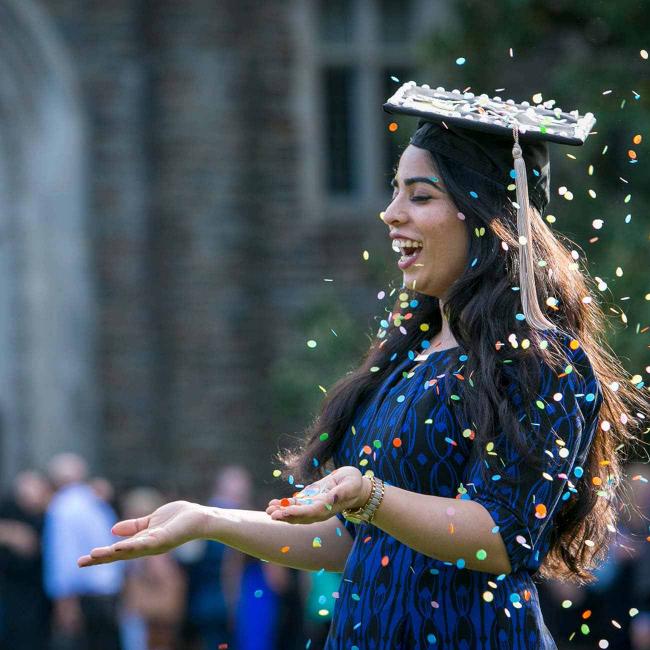 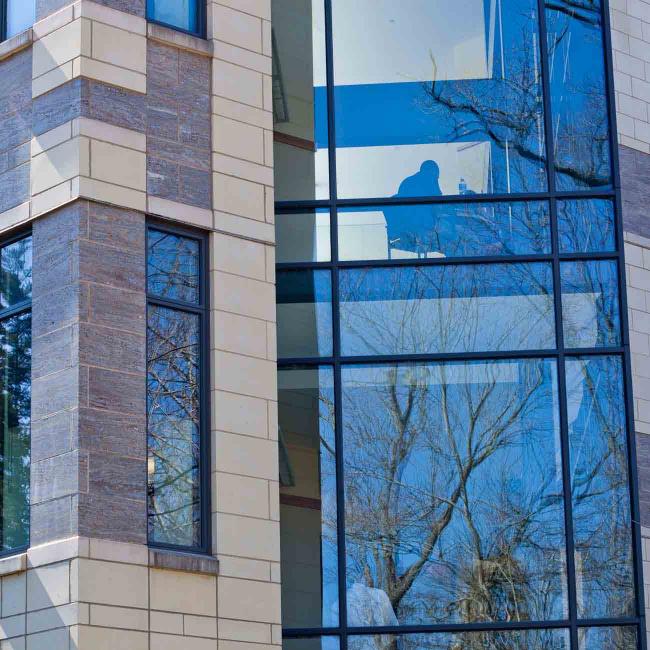 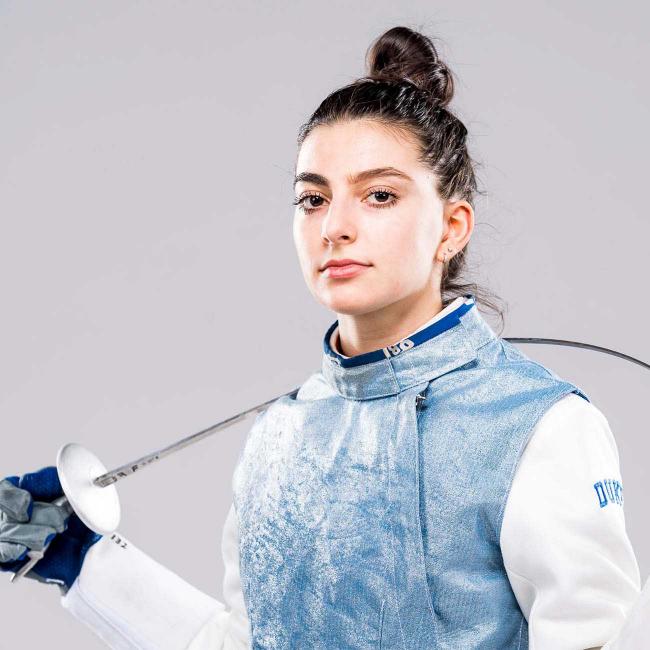